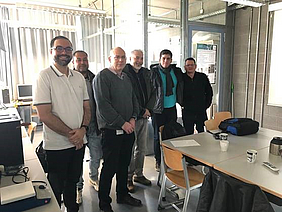 On Monday, December 9th, five scientists of the Brazilian Universidade de Brasília (UnB) visited Technische Hochschule Ingolstadt (THI). The visit was organized by UnB-professor João Paulo Carvalho Lustosa da Costa, who is currently working at EFS (Elektrische Fahrsysteme GmbH) as a guest scientist and is also an IAE lecturer at THI. Professor Elger, professor Zimmer, professor Facchi and Anne-Sopohie Kopytynski attended the meeting on behalf of THI.
They discussed topics for future research cooperations like vehicle safety, car2x-communication and sensor systems for autonomous vehicles. In addition, THI, CARISSMA and the strategic network AWARE were introduced. There are already some research connections between UnB and THI’s Institute of Innovative Mobility (IIMo).
On the basis of these connecting research topics with IIMo and CARISSMA, THI will now sign a treaty with UnB to encourage closer research cooperations as well as student exchange. Furthermore, UnB will be added as associate member to the AWARE network. AWARE is already cooperating with various universities in the southern Brazilian federal states Santa Catarina and Paraná and will broaden the network to the federal states of Brasília and São Paulo as well as other countries in Latin America.