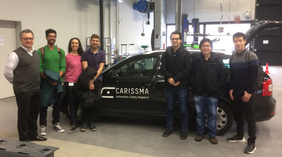 The recent successes of the international research group AISS, which has been established at the CARISSMA research and test center under the leadership of the Brazilian guest lecturer Prof. Dr. Alessandro Zimmer since the end of 2017, show that it is worthwhile for THI to open itself to internationalization. Mr. Zimmer, who initially initiated the AWARE network with the THI at his home university Universidade Federal do Paraná (UFPR), was brought to the CARISSMA test center as a guest professor in 2017 to establish the competence field Predictive Sensor Systems for Safe Automated Driving at the THI.

The calculation seems to work out. In just 2.5 years, the professor, who specializes in computer vision, image processing and artificial intelligence, has built up an international research team of 12 people from Germany, Portugal, Brazil, the UK and India: one post-doc, three doctoral students, seven master students and one bachelor student. In addition, Zimmer has already published ten scientific papers since his employment at the THI. Together, the team has raised a total research budget of €1.5 million, including the recently approved SAVE-ROAD project from the Bavarian Research Foundation with €335,000, which aims to safely predict the severity of traffic accidents using artificial intelligence and machine learning.