The project "Motorcycle detection at the vehicles' blind-spot using radar sensors" is designed to use radar and video sensors to detect motorcycles that are in the blind spot and issue warning signals accordingly. 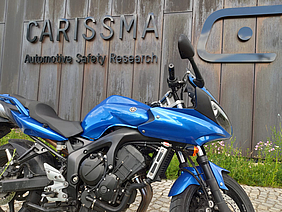 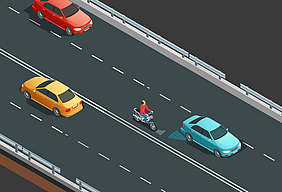 Simulation for the detection of a motorcycle in the blind spot

According to the WHO, Brazil ranks 5th among the countries with the most road deaths worldwide. The CARISSMA Institute of Automated Driving (C-IAD), together with the Brazilian research partners Universidade Facens and Instituto Tecnológico de Aeronáutica (ITA) as well as the industrial partners Bosch and Ford, has set out to improve road safety for motorcyclists, one of the biggest risk groups in Brazilian road traffic.

The project application was approved in the Brazilian funding line Rota 2030 with the highest score and a total project volume of 270,000 € (155.000 € promotion through the Brazilian Ministry of Economics, 115.000 € contribution of all partners). Rota 2030 is a new Brazilian funding program that offers tax incentives to the automotive industry to invest in technological developments and innovations and in joint R&D projects with universities. The project is coordinated by Facens University in Brazil and includes the financing of Brazilian master students who reconstruct critical traffic scenarios in CARISSMA laboratories to develop a radar system that detects safety-critical situations in real time.

With the help of an AI algorithm, motorcyclists are to be detected as quickly as possible and examined for critical positions and speed in order to warn the drivers of vehicles via software in good time for the purpose of accident avoidance. The project will start in August, and a first prototype should be tested by the end of 2021. The international research consortium was established with the help of the AWARE Center's research network.

The C-IAD, headed by Prof. Dr. Werner Huber, is one of three newly founded institutes within CARISSMA with more than 30 employees. It focuses on the development, testing and validation of automated driving functions and is closely linked with the THI Research Center for Artificial Intelligence and Machine Learning (AININ - Artificial Network Ingolstadt).